Mr. Nilsen was a crewman on the New Bedford, Mass., fishing boat Brighton, which was fishing in the Cape May area.  He was taken to the hospital after crewmen were unable to awaken him in the morning.  An autopsy was performed today to determine cause of death.

The husband of Mrs. Mildred (Alver) Nilsen of North Dartmouth, he was born in Rost, Norway, and emigrated from Norway to Minnesota in 1952.  He lived the last eight years in Dartmouth and had been fishing out of New Bedford with Captain Soren Henriksen.  Mr Nilsen attended Smith Mills Congregational Church in North Dartmouth.

On January 29, 1967, crewmen on board the Brighton, fishing near Cape May, New Jersey, were unable to awaken fellow crew member Hagbart Nilsen. He was taken to Burdette Tomlin Hospital in Cape May, where he died. 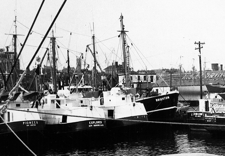