Mr. Hansen was survived by his mother Sigrid Hansen of Wildwood, N.J.,  his wife Marguerite, and two sons, Norman and Ronald. 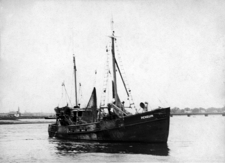