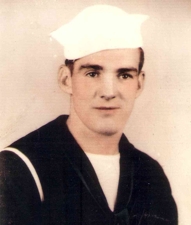 Mr. Bishop lived in Nantucket for a brief period as a young child. He was raised in East Boston and Revere, where he was educated at the Sacred Heart School and Revere High School before his family moved to Fairhaven in 1940. He entered his junior year at Fairhaven High School. He enlisted in the Navy and later joined the Merchant Marines.

He was married to Athena Adamides of New Bedford and was the father of a four-month-old son.

April 20, 1951. A Solemn High Mass of Requiem will be sung at 9 a.m. tomorrow at St. Joseph Church, Fairhaven, for Gerald J. Bishop who was lost at sea March 4. Husband of Mrs. Anna (Midas) Bishop, the 27-year-old fisherman was injured aboard the Jerry and Jimmy during dragging operations 42 miles southeast of Pollock Rip Lightship and fell overboard before he could be reached by fellow fishermen. He was a Navy veteran of World War II and father of an infant son.

Mr. Bishop attended Fairhaven High School before entering the Navy and had been fishing for four years. He was a communicant of St. Joseph Church. Survivors, besides his widow and son, are his mother and stepfather, Mr. and Mrs. Leo Powers, and four sisters, Mrs. Ruth Loughlin, Mrs. Mary Jane Howland, Miss Elizabeth Powers and Miss Myra Powers, all of Fairhaven.

Gerald Bishop attempted to reach a drag on the scalloper Jerry & Jimmy as it was swung over the side, but he lost his grasp when the ship rolled, and he was pinned between the vessel and the drag as the latter swung back. He fell into the sea and sank before a dory could reach him. The dragger Bobby & Harvey joined the crew in an unsuccessful six-hour search for Mr. Bishop. 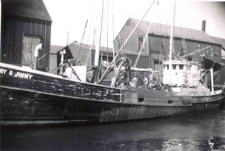