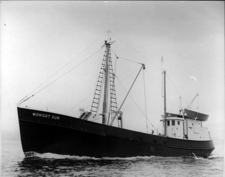 The Midnight Sun left New Bedford on November 10, 1962, and disappeared in a storm on November 14 as she headed home to New Bedford from the fishing grounds. Late Wednesday and Thursday a storm packing  winds of more than 90 miles an hour whipped seas into 50-foot waves as it ripped across Georges Bank. Local fishermen considered the storm to have been one of the worst of the century. Last radio contact was reported between 2 and 3 p.m. on Wednesday.  The Midnight Sun was reported overdue when she failed to return to port along with the other vessels she had been fishing with. The Coast Guard conducted a seven-day, 63,000-square-mile search for the vessel but found no wreckage.