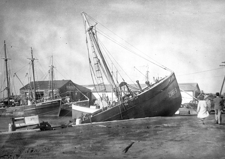 The Mary M. was wrecked off Cuttyhunk after stranding off the southwest end of the island in a 50-mile per hour gale on November 26, 1951. As the vessel began to break up, Jose Pereira was washed overboard, and William Tarvis and Captain Arthur Davis followed. Arnoldo Mano and Manuel Rocha are presumed to have entered the water at the same time. Engineer William H. Shepperd swam to the beach at the base of the cliff and found shelter in a shanty used to shelter goats. The next morning he reached a vacant house with a telephone and called the Coast Guard. Vessels and men from the Cuttyhunk Lifeboat Station, Woods Hole, two planes, and a helicopter conducted an extensive search. The wreck of the vessel was sighted quickly, and the bodies of all five men were found.