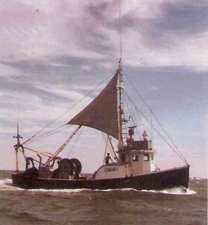 The Lark was en route from Nantucket Harbor to fish in Nantucket Sound when she grounded near Great Point. A Coast Guard utility boat arrived at around 8:00 p.m. and used a towline to free the vessel. After about five minutes, the Lark became free but suddenly capsized to port and sank. The Coast Guard crew rescued crew member Richard Sylvia, but Richard "Rick" Moniz was lost. The Coast Guard used five rescure boats, three helicopters, and a jet, as well as divers, but his body was not recovered.