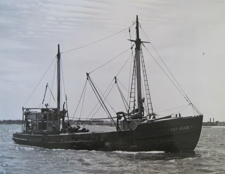 The scallop dragger Gay Head was returning to Fairhaven with a full catch when she struck a shoal during a heavy gale and was instantly shattered by the heavy seas off Nantucket, giving the crew no opportunity to escape. She had last been sighted that morning by the Jerry and Jimmy about 30 miles east of the Nantucket Lightship.

The dragger Southern Cross sighted wreckage off Wasque buoy, and the Coast Guard tug Arundel searched the scene. The wreckage, found on Muskeget Shoal, was landed at the State Pier in New Bedford, where the owner, Captain Daniel F. Mullins, identified it. No trace of the crew members was ever found.

One of the crew members, Kenneth Warne, was the nephew of Captain Karl Haakonsen.