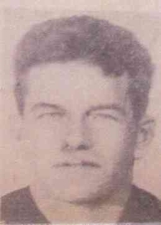 Captain Joshua W. "Spud" Murphy Jr. was "a cautious and capable" fishing captain. He and his father, Captain J. W. Murphy of 37 Campbell Street, and a brother, Captain Kief Murphy, skipper of the scalloper Michael Dinsmore of Gloucester, were all well-known fishermen. He was born in Tremont, Maine, and came to New Bedford in 1930. He began fishing in 1931 and assumed command of his first fishing vessel, the Huntington Sanford, during World War II.

During the war, Captain Murphy rescued 15 men in a lifeboat from an Australian ship that was torpedoed in the Georges Bank fishing grounds. He was the husband of Evangeline (Doucette) Murphy, sister of the Doris Gertrude's engineer, Herbert V. Doucette. They were married on November 11, 1936. Captain Murphy had two sons: Joshua 3d, 16; and Michael, 12. He was also survived by his mother, Grace (Murphy) Cherceillo of Providence, and a sister, Viola Oliver, of Natick, Mass., former wife of James C. Vieira, who was also lost from the Doris Gertrude.

The Doris Gertrude,  with a crew of eleven, was dragging for scallops on the south side of Georges Bank on January 13 when bad weather caused her to secure her fishing gear and jog in location approximately 150 miles east by south of Pollock Rip Lightship. The vessel was not seen again.

On January 26, the owner of the ship reported to the Coast Guard Rescue Coordination Center in Boston that the Doris Gertrude was overdue. A Coast Guard search continued until February 3. None of the men's bodies were recovered. Eighteen children were left fatherless. 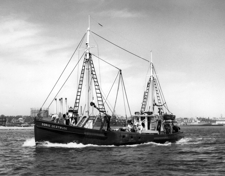